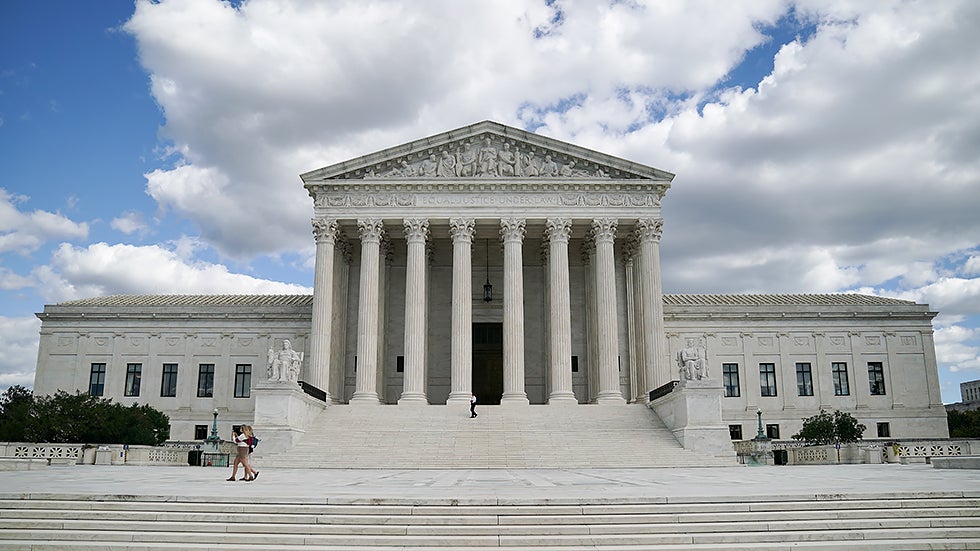 Supreme Court to Hear Mississippi Ban on Abortions before 15 Weeks

“This will be a landmark abortion case and the Court’s greatest opportunity to overturn Roe v. Wade since the 1992 Casey decision,” said Stacy Dunn, President of Tennessee Right to Life.

“While the numbers indicate a 6-3 conservative majority in favor of overturning Roe, we must fervently pray for the courage of Chief Justice Roberts and/or Justice Kavanagh to be the deciding vote(s),” said Will Brewer, Legal Counsel for Tennessee Right to Life. “If Roe is overturned, Tennessee will immediately prohibit all abortions thanks to the passage of the Human Life Protection Act in 2019,” said Brewer.

Dunn continued, "If Roe is overturned and abortion regulation is returned to the states, Tennessee is prepared.  Tennesseans want to protect the women and children of our state and can do so if the court will overturn the tragic decision that led to the loss of more than 60 million lives to abortion in the United States. The people of Tennessee are ready for the Court do the right thing and overturn Roe - it is long overdue.” 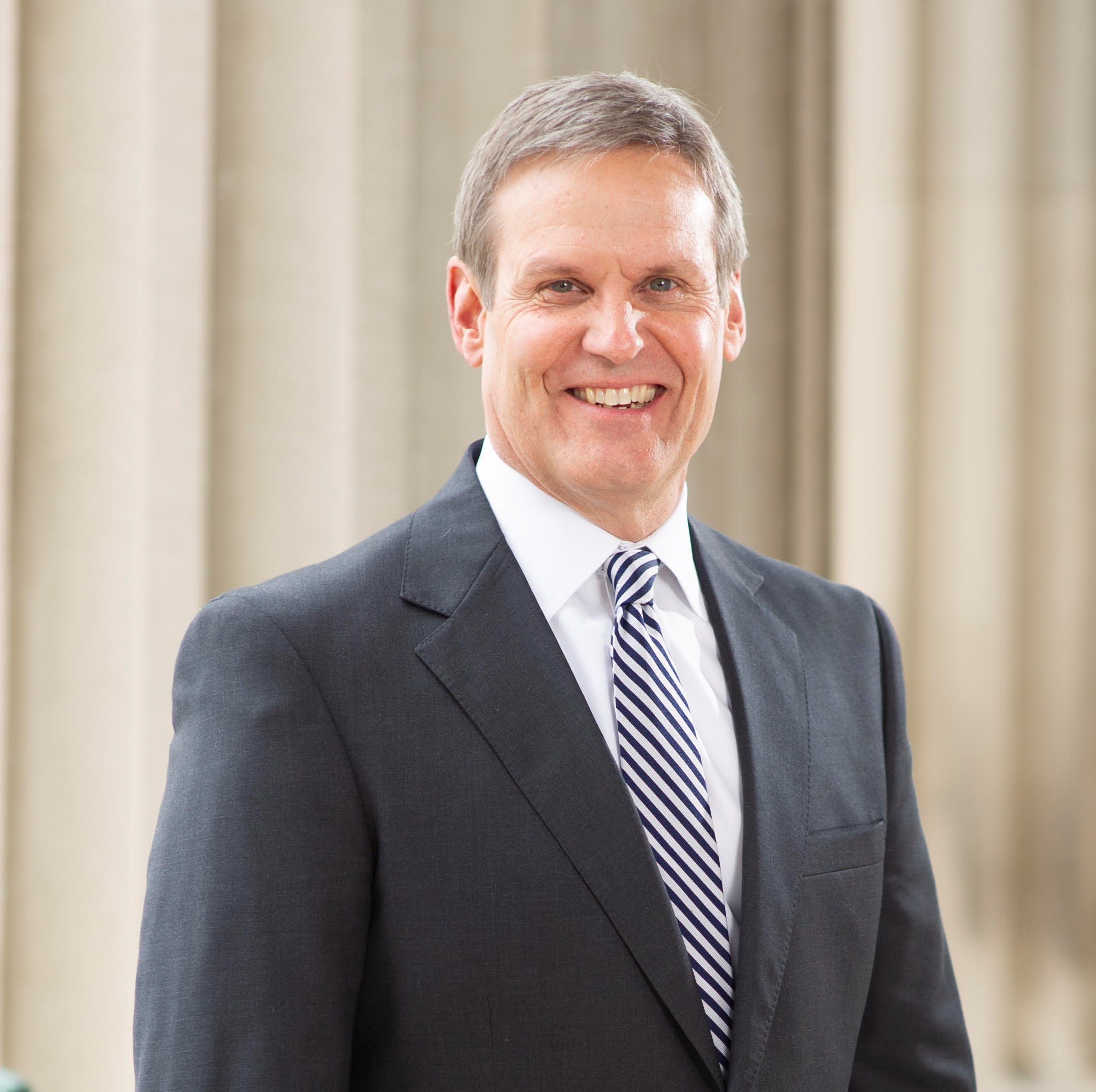 “This has been a tremendous year for further defining the humanity of unborn children,” said Will Brewer, lobbyist for Tennessee Right to Life.

“Pro-Life legislators voted to require the burial or cremation of unborn children, expand the definition of wrongful death victim to include all unborn children and prohibit lawsuits against doctors when parents claim they would have rather aborted their child than give birth,” said Brewer.

Passes Both the House and Senate

Today, the Tennessee General Assembly passed the Unborn Life and Liberty Act in both the House and Senate. This bill, which is now headed to Governor Bill Lee to sign, has a two-part purpose.

In Tennessee law, a person can be charged with fetal homicide for killing a woman and her unborn child regardless of the child’s gestational age. This would mean they would face criminal charges and face those penalties if convicted.

The second part of this legislation would also prohibit lawsuits against doctors who fail to discover or disclose a child's medical condition prior to the child's birth. These "wrongful birth" and "wrongful life" lawsuits occur when the parents argue that abortion would have been preferable to birth and life and then seek monetary damages claiming the doctor's breach of duty and omission.

“This has been a tremendous year for further defining the humanity of unborn children,” said Will Brewer, lobbyist for Tennessee Right to Life. “Pro-life legislators voted to require the burial or cremation of unborn children, expand the definition of wrongful death victim to include all unborn children and prohibit lawsuits against doctors when parents claim they would have rather aborted their child than give birth,” said Brewer.

In addition to passing the Life and Liberty Act today, the Tennessee General Assembly also passed the Unborn Child Dignity Act a few weeks ago.

“We continue to move the needle forward on recognizing unborn children as human beings with these types of bills,” said Stacy Dunn, President of Tennessee Right to Life. “Futhermore, discussion of these bills allowed for educational debate and powerful testimony on the dignity and humanity of unborn children,” said Dunn.

Tennessee Right to Life believes it should be public policy that abortion is never preferable to life, regardless of any medical conditions a child may have.
In Tennessee law, a person can be charged with fetal homicide for killing a woman and her unborn child regardless of the child’s gestational age. This bill would make the same true for civil lawsuits.
Tennessee law currently only allows for wrongful death claims for unborn children past the point of viability. The Prenatal Life and Liberty Act (HB 1252/SB1370) sponsored by Rep. Jeremy Faison (R-Cosby) and Senator Mike Bell (R-Riceville) would allow wrongful death claims to be litigated against someone who kills a mother and her unborn child at any stage of development.
The legislation would also prohibit lawsuits against doctors who fail to discover or disclose a child’s medical condition prior to the child’s birth. These “wrongful birth” and “wrongful life” lawsuits occur when the parents argue that abortion would have been preferable to birth and life and seek monetary damages claiming the doctor’s breach of duty and omission.
HB1252 is scheduled for 4/14/21 in the House Civil Justice Committee that starts at 1:00 p.m. CDT If it passed, it will be scheduled for the Full House Floor. In the Senate Judiciary Committee, the bill is expected it to be heard around 1:00 p.m. on 4/14/21. From there it will be scheduled for the Full Senate Floor. 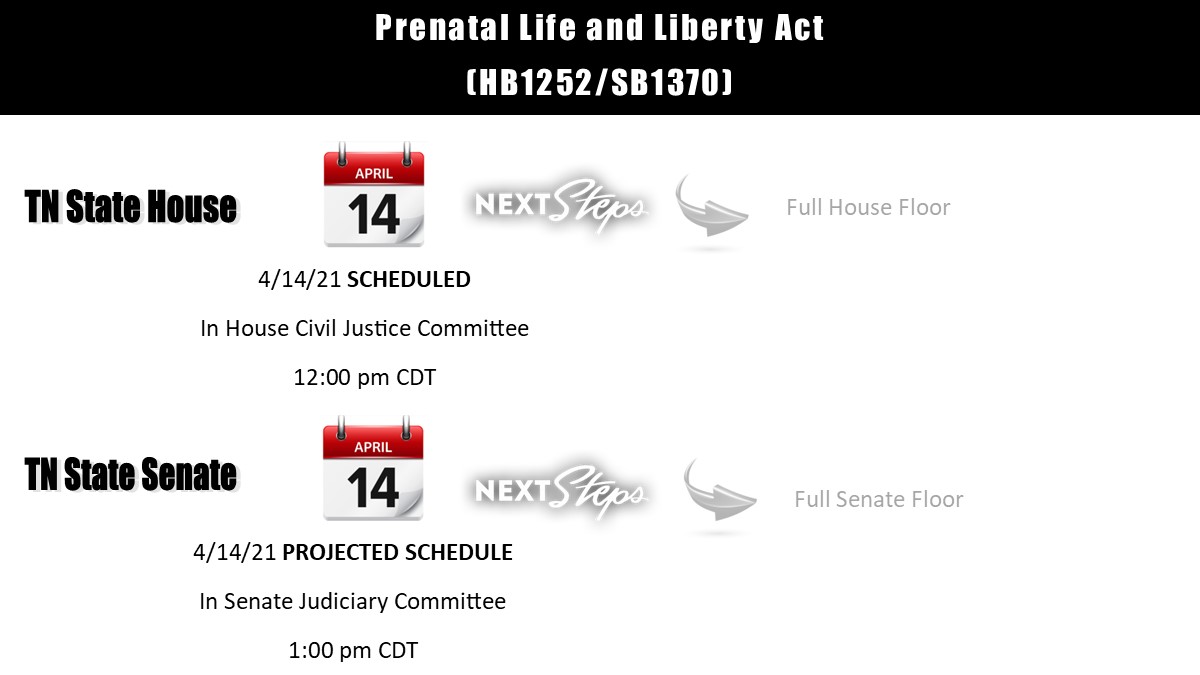 Tennessee Right to Life believes it should be public policy that the remains of unborn children be treated with as much respect and dignity as possible through either burial or cremation.
House Bill 1181 sponsored by Rep. Tim Rudd (R-Murfreesboro) and Senate Bill 0828 sponsored by Sen. Janice Bowling (R-Tullahoma) would require the burial or cremation of all fetal remains in the State of Tennessee. These unborn children deserve at the very least that their earthly remains be treated with respect and this legislation would ensure that happens.
See below for a breakdown of what's happened...what's next
and to contact your legislators! 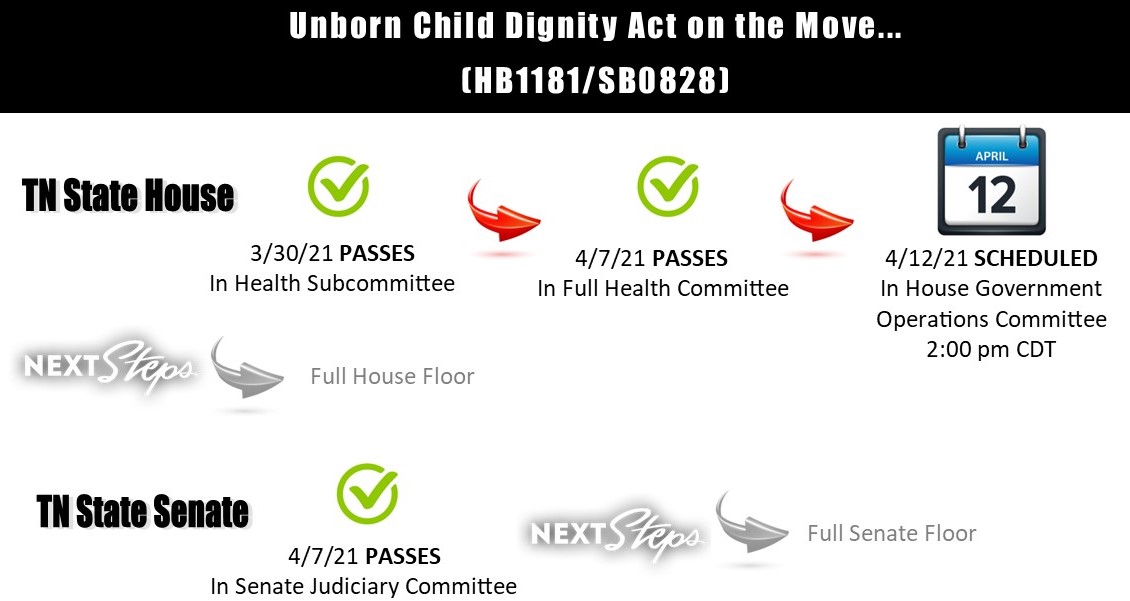 Tuesday, Rep. Rudd (R-Murfreesboro) presented the Unborn Child Dignity Act (H.B. 1181) in the House Health Subcommittee. This bill would require that all fetal remains in Tennessee be buried or cremated.

When Rep. Rudd attempted to present an amendment for a committee vote, Chairman Bob Ramsey (R-Maryville) attempted to kill the amendment and, thus, the bill by claiming that the amendment failed on a voice vote. However, Rep. Robin Smith (R-Hixson) asked for a roll call vote. The vote was 6-4 in favor of the amendment.

The Subcommittee then heard testimony in support of HB 1181 from three woman from And Then There Were None who had previously worked in the abortion industry and who testified in graphic detail about the way that fetal remains were disposed of when they worked in the abortion industry. The testimony was gripping and riveted members of the Subcommittee.

After brief debate on the bill, HB 1181 passed onto the Full Health Committee on a 6-4 vote. Notably, Chairman Bob Ramsey and Speaker Pro Temp Pat Marsh voted against the bill.

HB 1181 would require the burial or cremation of all fetal remains in the State of Tennessee. Women and unborn children deserve the dignified treatment of fetal remains and this legislation would ensure that happens.

According to Will Brewer, Lobbyist for Tennessee Right to Life, the U.S. Supreme Court on May 28, 2019 upheld an Indiana law requiring fetal remains from an abortion be buried or cremated. This court decision is powerful in supporting Tennessee Bill 1181 that is similar in scope and purpose.

Tennessee Right to Life and pro-life Tennesseans believe that the remains of aborted children should be treated with dignity and not as trash or medical waste.

Pro-abortionists argued that the Indiana law would create a new expense – and it was not clear who would be financially responsible, the patient or the provider.   They believe asking women to bear the expense could put abortion out of the financial reach of some women.  Interestingly, they believe this requirement is unusual for any kind of medical procedure and do not recognized that the remains of an unborn child are that of a person.  They considered the law punishment for those seeking a “normal medical procedure” and that abortion patients are being targeted.

Pro-abortion activists will oppose this legislation on the false pretense that it creates an obstacle for women, but in fact, their opposition comes from the refusal to acknowledge the humanity of the unborn child and to thereby treat their bodies with dignity and respect.   Tennessee Right to Life supports the Unborn Child Dignity Act and is working for its passage, because, if passed, this law will enhance the dignity of human life that Tennesseans support.  Other state governments have passed or are considering similar legislation.

Tennessee Right to Life Board of Directors elects Stacy Dunn as its new President. She succeeds Brian Harris who resigned December 31, 2020.

Dunn has been involved with the organization in various capacities for many years and currently serves as the Executive Director of the Knox County Chapter. She also has served as Vice President of the organization until her recent election.

“I am grateful to be able to serve as President to this organization that has a long history of protecting unborn children and their mothers. My goal for Tennessee Right to Life is to continue to educate our fellow Tennesseans about the beauty of life in all its ages, stages and conditions and to work for legislation that will protect the most vulnerable among us.”

On Friday, February 26, 2021, Federal District Judge William Campbell, appointed by President Donald Trump, issued a ruling to extend a temporary injunction against one of Tennessee’s newest pro-life laws. That law would require abortionists to inform women that there is a technique available to them to potentially reverse the effects of the abortion pill. However, due to this injunction, the law is currently prohibited from going into effect. This injunction will extend until Judge Campbell decides the case on its merits or, hypothetically, until the Sixth Circuit decides to overturn the injunction ruling.

“Once again, the voters of Tennessee have been silenced as Judge William Campbell has enjoined a newly enacted law that would inform women that there is a method available to them to possibly reverse the abortion pill. Judge Campbell was made aware of the success of this medical technique and, still, had the audacity to call the law “misleading.”

“The work that pro-life Tennesseans and their duly elected officials have done to protect women and their unborn children is under attack by the abortion industry.  Judge Campbell’s decision plays right into the hands of those who want to keep women in the dark about their unborn children and all the options available to them.”

“We urge Judge Campbell to weigh the evidence when he hears the merits of the case and truly give women a choice, rather than the misleading information that they are currently being given by abortionists.” -Stacy Dunn, President of Tennessee Right to Life

“Joe Biden’s nomination of Xavier Becerra shows how he is marching to the tune of pro-abortion activists,” said Carol Tobias, president of National Right to Life. “Xavier Becerra has no health care experience but, if confirmed, would lead the Department of Health and Human Services during the COVID-19 pandemic.”

“Given HHS's critical role in ongoing vaccine production and distribution, along with the regulatory power the agency has in implementing recovery legislation, it is alarming that a nominee with no health experience has been put forth,” Tobias continued. “Becerra’s extreme abortion advocacy and lack of health care experience disqualifies him from leading the nation’s healthcare agency.”

The two most immediate prior heads of HHS, Alex Azar and Dr. Tom Price each brought a depth of healthcare experience. Mr. Azar had previously been appointed to HHS and had years of experience working with the pharmaceutical industry.

“The nation needs a nominee with the necessary public health experience to shepherd an end to the death and disruption of the Covid-19 pandemic,” said Tobias. “Mr. Becerra simply does not have that experience.”